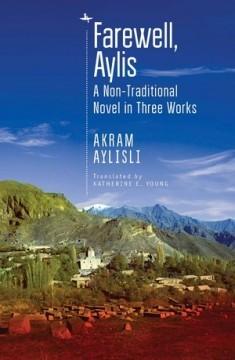 This event will be held virtually as a Zoom webinar and streamed via YouTube Live. There will be no in-person event.

Please join the Harriman Institute, PEN America, and the Institute for the Study of Human Rights for a discussion about the works of Akram Aylisli, author of Farewell Aylis: A Non-Traditional Novel in Three Works (Academic Studies Press, 2018), with translator Katherine E. Young and journalist Alex Raufoglu. Moderated by Professor Mark Lipovetsky. This event is part of our Contemporary Culture Series. Unfortunately, Akram Aylisli will not be available to join the webinar.

The three novellas of Farewell, Aylis take place over decades of transition in a country that rather resembles modern-day Azerbaijan. In Yemen, a Soviet traveler takes an afternoon stroll and finds himself suspected of defecting to America. In Stone Dreams, an actor explores the limits of one man’s ability to live a moral life amid conditions of sociopolitical upheaval, ethnic cleansing, and petty professional intrigue. In A Fantastical Traffic Jam, those who serve the aging leader of a corrupt, oil-rich country scheme to stay alive. Farewell, Aylis, a new essay by the author that reflects on the political firestorm surrounding these novellas and his current situation as a prisoner of conscience in Azerbaijan, was commissioned especially for this Academic Studies Press edition.

Akram Aylisli is an Azerbaijani writer, playwright, novelist, and editor. His works have been translated from his native Azeri into more than twenty languages. In 2014 Aylisli was nominated for the Nobel Peace Prize in connection with his novella Stone Dreams. Mr. Aylisli lives under de facto house arrest in Baku, Azerbaijan.

Alex Raufoglu is an Azerbaijani-American journalist, researcher, and press freedom advocate who focuses on Eurasia. Since 2008, Raufoglu has lived in the U.S. where he works as a journalist for several media outlets. His reporting on governance, the media, human rights, and security issues has appeared in international news outlets. He also represents Turan News Agency in the United States. In addition, Alex is the country specialist on Azerbaijan and Georgia at Amnesty USA in Washington D.C. Raufoglu serves as a board member of The Association of Foreign Press Correspondents in the United States.

Katherine E. Young is the author of Day of the Border Guards and former poet laureate of Arlington, VA. Young has translated two collections of poetry by Inna Kabysh, Two Poems and Blue Birds and Red Horses. Her translations of Russian and Russophone poets have won national and international awards. She is the recipient of a 2017 Translation Fellowship from the National Endowment for the Arts for the translation of Farewell, Aylis.