Lara J. Nettelfield is a Senior Lecturer in the Discipline of Human Rights at the Institute for the Study of Human Rights and the Department of Political Science at Columbia University. She is currently working on an oral history project, The New Humanitarians, about the refugee crisis in Europe and the Middle East. Her research interests include human rights, forced migration, transitional justice, technology and society, and social movements.

In 2015, she published a co-authored manuscript, Srebrenica in the Aftermath of Genocide (Cambridge University Press). This book reveals how interactions between local, national and international interventions - from refugee return and resettlement to commemorations, war crimes trials, immigration proceedings and election reform - have led to subtle, positive effects of social repair, despite persistent attempts at denial. Srebrenica in the Aftermath of Genocide received Honorable Mention for the International Studies Association's Ethnicity, Migration and Nationalism (ENMISA) Distinguished Book Award (2015) and was shortlisted for the 2015 Rothschild Prize of the Association for the Study of Nationalities (ASN).  In 2015, Senado Kreso translated it into Bosnian for the Institute for History (Sarajevo).

A political scientist by training, Nettelfield received Ph.D., M.Phil. and M.A. degrees from Columbia University and an A.B. degree from the University of California, Berkeley. She also completed a certificate at Columbia's Harriman Institute. She has worked for international organizations such as the International Commission on Missing Persons (ICMP), the Organization for Security and Cooperation in Europe (OSCE) and the NATO Parliamentary Assembly, in addition to serving as an advisor for non-governmental organizations. She has served on the editorial board of the British International Studies Association’s (BISA) flagship journal Review of International Studies (RIS), East European Politics, and the Sarajevski žurnal za društvena pitanja (Sarajevo Social Science Review). She frequently contributes to the press, including the New York Times, the Guardian, Buzzfeed, Foreign Policy, the BBC, the Edmonton Journal, OpenDemocracy, NBC, the Detroit Free Press, and the St. Louis Post-Dispatch. She is a fellow of the Higher Education Academy (HEA) (UK). 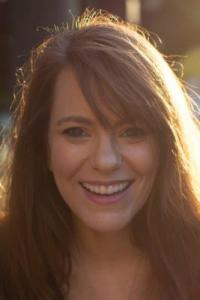