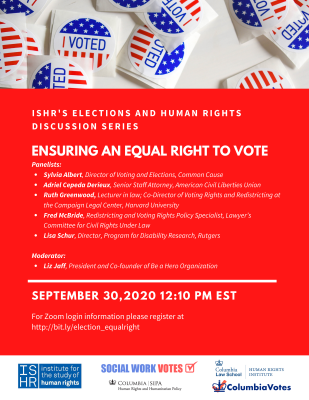 To view a recording of the event, please click here: https://youtu.be/LcQOwMt5VK8

Moderator: Liz Jaff, President and Co-Founder, Be a Hero

Bios:
-Sylvia Albert, Director of Voting and Elections, Common Cause. Sylvia Albert works with national staff and Common Cause state offices to press for reforms that expand access to the ballot for eligible voters and promote fair representation in our democracy.

Sylvia brings more than a decade of professional experience in public interest law and public policy campaigns expanding ballot access, reducing barriers to participation, and combating voter intimidation among historically disenfranchised communities. She has also done extensive work on fair housing issues serving as a program analyst and an advisor to the Assistant Secretary for Fair Housing and Equal Opportunity in the Obama Administration.

Sylvia holds a Bachelor of Arts in Political Science from University of California, Berkeley and a Juris Doctor from Georgetown University Law Center.

Adriel litigates voting rights cases nationwide, including challenges to unlawful voter purges and discriminatory barriers to voting. Adriel also focuses on issues related to the census, minority vote dilution, and the disenfranchisement of residents of non-state jurisdictions like Washington, D.C. and U.S. territories.

Adriel received his J.D. from Columbia Law School, where he was an editor for the Columbia Law Review. He holds a bachelor’s degree in History and Political Science from Williams College.

Fred served as the Redistricting Coordinator/Research Analyst for the Voting Rights Project of the American Civil Liberties Union for over 12 years, and has served as senior staff member for various voting rights organizations. He analyzed and drew redistricting plans for elected officials, civic groups, organizations, and citizens, and evaluated election returns performing statistical analyses to determine voting behavior patterns. To date, Fred has drawn and evaluated redistricting plans, performed racially polarized voting studies and demographic analysis, served as expert witness for several voting rights cases, and presented at redistricting hearings for over 100 jurisdictions in 23 states, and the District of Columbia. Prior to joining the Lawyer’s Committee, Fred taught political science at Georgia State University Perimeter College.

He has a PhD in Political Science from Clark Atlanta University with undergraduate and graduate political science and public administration degrees from Louisiana State University and Southern University.

-Ruth Greenwood - Lecturer in law; Co-Director of Voting Rights and Redistricting at the Campaign Legal Center, Harvard University. Ruth Greenwood is a lecturer on law at Harvard Law School and is the Co-Director of Voting Rights and Redistricting at the Campaign Legal Center. Ruth is based in Cambridge, Massachusetts and has been working in voting rights for over ten years. Ruth litigates a variety of redistricting cases, with a particular focus on ending partisan gerrymandering and promoting minority representation. Ruth litigated two partisan gerrymandering cases from the trial level to the Supreme Court of the United States (Whitford v. Gill and LWVNC v. Rucho), and has advised dozens of states on how to draft and implement independent redistricting commissions.
Ruth was previously the Lead Counsel for Voting Rights at the Chicago Lawyers’ Committee for Civil Rights Under Law, and prior to that a Redistricting Fellow with the Democratic National Committee’s Voting Rights Institute. She received her Masters in Law from Columbia Law School in 2009 and her undergraduate law and science degrees from the University of Sydney in 2005 and 2003.
Ruth was a 2016 Chicago Civic Leadership Academy Fellow and was awarded an Exceptional Service Award by the Chicago Board of Elections’ in 2014 for her work on Chicago Democracy Week.
-Lisa Schur: Professor Lisa Schur is the Director of Program for Disability Research at Rutgers University’s Department of Labor Studies and Employment Relations. She focuses on disability issues in employment and labor law, particularly the Americans with Disabilities Act and its relationship to other laws and social policies. She also studies alternative work arrangements such as contingent work, and the connections between workplace experiences and political participation. Her work has appeared in the Industrial and Labor Relations Review, Social Science Quarterly, Political Research Quarterly, Industrial Relations and other journals.
-Liz Jaff: Liz Jaff is the President of Be A Hero PAC, an organization she co-founded with Activist Ady Barkan. Be A Hero ran the $4 million small dollar donation campaign against Susan Collins, and ran the top performing health care ads in the country for the 2018 cycle - Be A Hero recently launched the groundbreaking healthcare conversations, "Uncovered" with top presidential Candidates. Jaff is Obama ‘07, ‘08, and 12 - worked on the Hill, and was the VP for Business Development at Crowdpac. Jaff worked at the White House, the U.S. Agency for International Development and the Department of Commerce. She ran a congressional race in 2014, and has worked with hundreds of local electeds across the country raise money online. In 2017 Jaff ran for DNC Vice Chair on a platform of opening up democratic tech and data. She helped recruit the 2017 DNC Tech team, now one of the biggest and most diverse in the history of the DNC, and works with new tech products that aim to break up monopolies and old school tactics. Jaff started a small strategy firm, Leopard Strategies, , and loves rapid response, branding, and candidate recruitment. She sits on the board of Netroots Foundation, is an Arena PAC Advisor and served as an appointee on the DNC Transition Team after her run for DNC Vice Chair.
Click below to see the event on the Columbia events calendar.
Event link