The First Genocide of the 20th Century 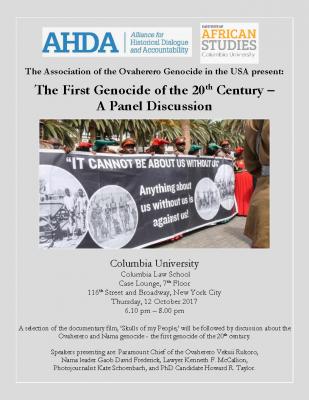 A selection of the documentary film, ‘Skulls of my People,’ will be followed by discussion about the Ovaherero and Nama genocide - the first genocide of the 20th century.

From 1884-1918, the native inhabitants of the German colony of South West Africa, now Namibia, were subject to land expropriation, mass resettlement, and genocide, at the hands of their German rulers. One hundred years later, the descendants of the victims of the genocide have taken the German government to court in New York City. This event, hosted by the Association of the Ovaherero Genocide in the USA, and sponsored by the Alliance for Historical Dialogue and Accountability at Columbia University, aims to put this court case into context. What is the Ovaherero and Nama genocide? What effect does it continue to have in Namibia today? Who is taking the German government to court, and why now? A selection from Vincent Moloi’s documentary film, Skulls of My People, will be followed by a panel discussion covering these topics. Panelists will include all of the listed plaintiffs in the court case, their lead attorney, and a photojournalist who has documented the legacy of the genocide in Namibia.