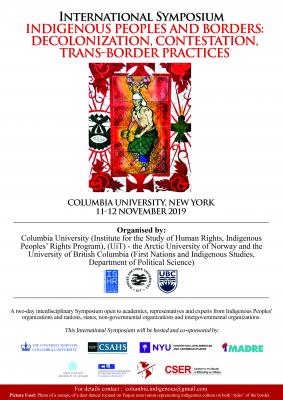 Organized by
Columbia University (Institute for the Study of Human Rights, Indigenous Peoples’ Rights Program), (UiT) - the Arctic University of Norway and the University of British Columbia (First Nations and Indigenous Studies, Department of Political Science)

Selected issues for discussion
• Borders, territories and the politics of recognition: evolving contexts of statehood, and indigenous governance
• Borders, lands, territories in everyday life worlds, public memory and border poetics
• Re-bordering and de-bordering by the state and its high-tech intelligence-military complex
• The UN Declaration on the Rights of Indigenous Peoples as a universal document and framework of situated border politics
• Indigenous visions of multiple territorialities and trans-border movements
• Well-being with culture and identity within and without borders in the light of the Sustainable Development Goals