Screening of "The Long Haul" 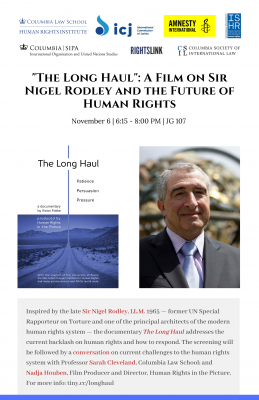 Inspired by the late Sir Nigel Rodley, LL.M. 1965 — former UN Special Rapporteur on Torture and one of the principal architects of the modern human rights system — the documentary The Long Haul addresses the current backlash on human rights and how to respond. The screening will be followed by a conversation on current challenges to the human rights system with Professor Sarah Cleveland, Columbia Law School; and Nadja Houben, Film Producer and Director, Human Rights in the Picture.

Nadja Houben is the co-founder and Director of Human Rights in the Picture (founded in May 2013). She manages the Dutch foundation that visualises human rights stories for a better world. With a mission to promote respect for human rights through film and art the small team is strengthened by a hub of filmmakers, visual artists, photographers, translators, editors, educators, human rights defenders, lawyers, NGOs, diplomats and students. After graduating in Law from Erasmus University Rotterdam in 1994, Houben worked for the International Service for Human Rights on human rights defenders and the UN human rights mechanisms and for the International Commission of Jurists in Geneva on the independence of judges and lawyers. She worked for the Dutch Ministry of Justice on the obligations of the Dutch government under the UN Human Rights treaties before making a move to working with visual arts and becoming the first director of foundation True Heroes Films in 2006. Houben is a Dutch national and currently works from Brussels.