General Qasem Soleimani, head of the Quds Force, a branch of the Iranian Revolutionary Guard Corps (IRGC), was killed by a US air strike on January 3, 2020. President Donald J. Trump justifies killing Soleimani, asserting that his intervention prevented an imminent attack. Congress demands information on the operation amidst a furor over whether the hit was legal, justified, and judicious.

Not only are extrajudicial executions and assassinations illegal. Both are counter-productive to peace and security. While extrajudicial execution or assassination may eliminate an individual, they rarely neutralize the cause he championed. To the contrary, they lead to intensified zealotry, fervor, and commitment to the cause. Others always stand ready to replace those who have fallen.

Millions of Iranians joined Soleimani’s funeral procession in a gesture of mass martyrdom. Their mourning demonstrates the broad popular support for Soleimani. Iranians revere him for opposing the US invasion and occupation of Iraq. They support Soleimani’s assistance to proxy groups committed to destroying Israel. Soleimani also championed the struggle of Shiites against Sunnis, defending Iran and Shiite shrines in Iraq from the Islamic State.

A range of factors well beyond obligations under international law would have bearing on the decision to kill Soleimani. Trump and his advisers must have considered whether short-term benefits enhanced overall security, or whether killing Soleimani would be counterproductive, resulting in a cycle of violence and revenge. Targeted killings may prevent an immediate threat, but they also increase the number of one’s enemies and their desire to do harm.

Why did Trump order Soleimani’s killing now? What motivated Trump to take action? Is the US safer with Soleimani dead?

US intelligence agencies should provide analysis about the imminent threat. Was Soleimani plotting an act of sensational violence or were his actions just business as usual?

Was Trump deliberate and dispassionate when ordering the attack? Soleimani had recently made a series of derogatory statements that ridiculed Trump, irking the President.

If US officials are so confident that killing Soleimani makes Americans safer, why are all Americans advised to leave Iraq?

Iran’s Supreme Leader vowed a harsh response. True to his word, Iran launched ballistic missiles against the al-Asad air base and at the Erbil air field. Did Trump thoughtfully consider how Iran might respond?

The US military performed flawlessly, carrying out its tactical mission without a hitch. There are important questions, however, about the strategic coherence behind Trump’s decision to pull the trigger, as well as legal implications.

Last week, Iraqis were protesting Iran’s violations of Iraq’s national sovereignty. Today, they are chanting “death to America”, having ransacked the US Embassy in Baghdad.

The Iraqi parliament passed a resolution 170 to 0, demanding that US forces leave the country. Trump threatened harsh sanctions and demanded compensation from Iraq for the US air base. America’s standing in Iraq has been destroyed and Iraq is on the verge of renewed civil war.

The Iranian opposition is cowed by recent events. No one dares question the Great Leader, while he weeps over Soleimani’s coffin and millions are marching in solidarity.

Iran has resumed its nuclear enrichment activities. A breakout could mean that Iran will have a nuclear weapon in a matter of months.

Killing Soleimani does not mean that Iran’s malign activities will stop. The IRGC immediately appointed a new head of the Quds Force. Another round of attacks could be undertaken by Iran or its proxies at any time, targeting US citizens or cities such as Haifa or Dubai. Khataib Hezbollah and other Popular Mobilization Units are threatening action against US interests.

Meanwhile, the fight against ISIS has been suspended. After the US abandoned the Syrian Defense Forces, betraying our Kurdish allies, the Global Coalition against ISIS was further fractured by the killing of Soleimani.

America’s credibility worldwide was already in decline before Soleimani’s killing. A cloud hangs over President Trump. Many surmise that he ordered the strike to distract the public from his impeachment.

Until more information is provided about the decision to kill Qasem Soleimani, America’s credibility is further in doubt. It will take generations for the United States to recover its standing.

Mr. Phillips is Director of the Program on Peace-building and Human Rights at Columbia University’s Institute for the Study of Human Rights. He served as a Senior Adviser and Foreign Affairs Expert working on Iraq at the State Department under President George W. Bush. 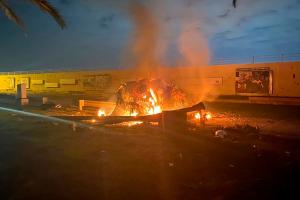