The Program on Peace-building and Human Rights (PBHR) at the Institute for the Study of Human Rights convened a roundtable on “Kurds in Iran: Current Conditions and Future Prospects” on January 27. The meeting was co-sponsored with the Washington Kurdish Institute (WKI).

Participants from both factions of the Kurdistan Democratic Party-Iran (KDPI) and the Komala Party discussed security, political and economic challenges of Kurds in Iran who number between 10 and 12 million. The Iranian government violates the human rights of several minority ethnic and religious groups, including Kurds, Azeris, and Baluch. The Iranian government discriminates against Iranian Kurds with gaining access to university studies, employment, business licenses and economic aid, getting permission to publish books and exercising their civil and political rights.

The state restricts the political activities and targets the Kurdish population. For example, Iranian forces carried out an attack on the KDPI headquarters in Koya, killing at least a dozen individuals. Other reports confirm violations of international law, including torture, due process violations, indiscriminate killings, intimidation against human rights defenders, and executions. Kurdish political prisoners represent almost half of the total number of political prisoners in Iran.

Despite the presence of the oil and gas industries, the Kurdish provinces in Iranian Kurdistan have some of the highest unemployment rates in all of Iran at 16.3 percent. According to the UN Committee on Economic, Social and Cultural Rights, the 1995 Selection Law based on Religious and Ethical Standards, known as the gozinesh process, hinders equal opportunity or treatment in employment for persons belonging to ethnic and religious minorities in Iran. There is employment discrimination based upon political opinion, previous political affiliation, and religious affiliation such as followers of the Baha’I faith. Landmines and other explosive remnants from the Iran-Iraq War (1980-88) hinder farmers, nomads, shepherds and traders. Due to the lack of formal economic opportunities, some have turned to smuggling commodities such as tea, tobacco and fuel. Suicide rates have been on the rise in Iranian Kurdistan, which has highlighted the growing economic crisis in the region.

The lack of respect for the physical integrity rights of Kurds coupled with systematic discrimination in cultural and economic spheres limits the right to self-determination for Iranian Kurds. Despite these obstacles, Kurdish parties are determined to improve the conditions for Iranian Kurds and work towards the establishment of a federal, democratic republic in Iran. Participants discussed (i) constitutional arrangements, (ii) collective and minority rights, and (iii) decentralization issues/power-sharing. 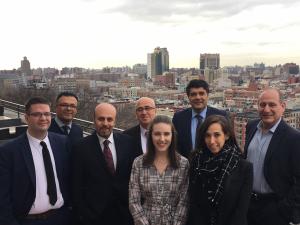