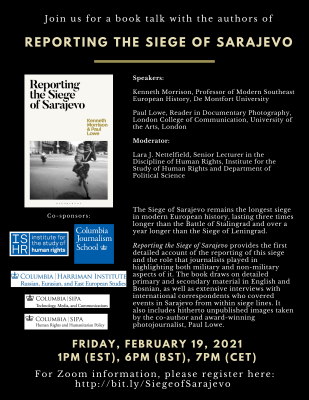 Moderator:
-Lara J. Nettelfield, Senior Lecturer in the Discipline of Human Rights, Institute for the Study of Human Rights and Department of Political Science

Reporting the Siege of Sarajevo provides the first detailed account of the reporting of this siege and the role that journalists played in highlighting both military and non-military aspects of it. The book draws on detailed primary and secondary material in English and Bosnian, as well as extensive interviews with international correspondents who covered events in Sarajevo from within siege lines. It also includes hitherto unpublished images taken by the co-author and award-winning photojournalist, Paul Lowe.

This event is co-sponsored by the Harriman Institute, the Columbia Journalism School, and SIPA's Technology, Media, and Communications Specialization and Human Rights and Humanitarian Policy Concentration.