Fruit of Their Labor - Film Screening and Conversation with Director 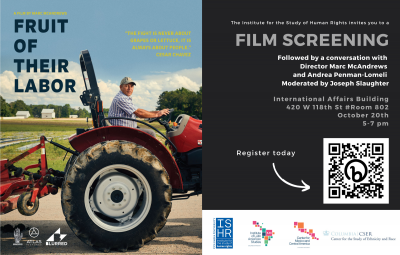 The Institute for the Study of Human Rights, in conjunction with the Institute of Latin American Studies, the Center for Mexico and Central America and the Center for the Study of Ethnicity and Race, invite you to a film screening of Fruit of Their Labor, a film by Marc McAndrews. After the screening, ISHR Director Joseph Slaughter will moderate a conversation between the filmmaker and PhD student Andrea Penman-Lomeli.

Marc McAndrews’ work focuses on the human element of the stories. He’s the author of the critically acclaimed book, Nevada Rose, which documented the people and places of Nevada's legal brothels. Marc has worked closely with organizations such as Open Society Foundation and the United Nations Global Compact and his work has been featured in the New York Times, The New Yorker, Smithsonian, Time and many others.

Andrea Penman-Lomeli is a doctoral candidate in the Department of English and Comparative Literature.
Please note that this event has limited capacity and will be on a first-come, first-served basis
Click below to register for the event
Event link