Responding to the Invasion of Ukraine: A Discussion with the Ambassadors of Ukraine, Sweden, Canada, Germany to the UN, UN Women and Civil Society 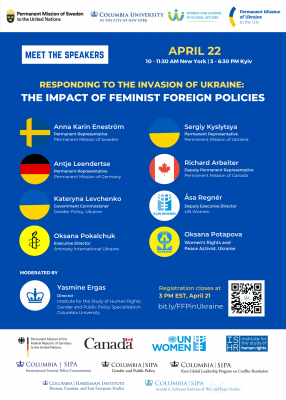 Register for the webinar here: bit.ly/FFPinUkraine

Please join the WGGA Network, the Permanent Missions of Sweden and Ukraine to the UN on Friday, 22nd of April from 10 - 11:30 AM New York / 3 - 4:30 PM London / 5 - 6:30 PM Kyiv time for our upcoming webinar, Responding to the Invasion of Ukraine: The Impact of Feminist Foreign Policies.

Since the Russian invasion of Ukraine, more than 10 million people have fled or become internally displaced, families have been split, basic services disrupted, and we hear deeply shocking reports of massacres, sexual and gender-based violence, and human trafficking. Like all wars, this one has a gendered dimension, and countries with a Feminist Foreign Policy play a vital role in addressing the war in Ukraine, given their dedication to feminist and gender-responsive approaches throughout their foreign policies. In a time when foreign policies are being put to the ultimate test – a time of war – what are Feminist Foreign Policy countries doing to ensure that gender is at the core of their response.

This webinar is intended to bring together policymakers, analysts, and practitioners to discuss concrete measures for feminist responses to the Russian invasion of Ukraine. We seek to foreground the voices of Ukrainians most directly affected by the conflict and with the deepest knowledge of the situation; at the same time, we also recognize a responsibility to attempt to shape the policies of our own governments.

Professor Yasmine Ergas, the Director of the Institute for the Study of Human Rights, and the Gender and Public Policy Specialization at the School of International and Public Affairs will moderate the webinar which will be followed by a brief Q&A segment.

* Hosted by Permanent Missions of Sweden and Ukraine to the UN and Columbia University’s Women and Gender in Global Affairs Network at the Institute for the Study of Human Rights.

Click below to register for the webinar
Event link