The following is an excerpt from the blog post written by Akiko Kobayshi (pictured left), a graduate student at the School of International and Public Affairs, who volunteered with HRAP alumni Esther Adhiambo at the  Initiative  for  Equality  and  Non-Discrimination (INEND) in Kenya.

Founded  by  2014  Advocate Esther  Adhiambo after  she  completed  HRAP,  the  Initiative  for  Equality  and  Non-Discrimination  (INEND) strives to achieve a more inclusive society for sexual and gender minorities in the coastal region of Kenya by pursuing both bottom-up and top-down approaches.

In Kenya, homosexual conduct is considered illegal and the accused can face a maximum of 14 years in prison. Opinion leaders such as politicians and religious leaders have publicly condemned  homosexuality  and  transgenderism. Public opinion towards sexual minorities is very hostile as well. The Pew Research Center reported 88 percent of people surveyed believed that homosexuality is “morally unacceptable.”

As the first step of INEND’s bottom-up approach, we  targeted  motorcycle  taxi  drivers  who  are known for their violence toward the LGBT community. Many young men who cannot find jobs in other industries work as motorcycle taxi drivers. INEND would like them to become allies of the LGBT community — they are on the ground 24/7 and know every little corner.

To understand how we can work with them, we conducted a survey to understand the motorcycle taxi drivers’ perceptions towards sexual and gender minorities and their reasons for assaulting  them. Approximately  160  motorcycle  taxi drivers were reached through two focus group discussions and a questionnaire. Their beliefs on why people “become gay” was interesting. They  included  peer  pressure,  imprisonment, witchcraft,  heartbreaks,  rape,  gender  separation at school, parental upbringing, and media influence. We also asked why they target the LGBT community and what kinds of programs might change their attitudes. Based on the findings from this survey, INEND is now developing plans how to engage the motorcycle taxi drivers to change their perceptions and to recruit them as human rights defenders.

Working with INEND for 10 weeks was a wonderful experience. I witnessed the discrimination and stigma people live with, the difficulties of tackling the taboos, and the commitment of people to change their society. I experienced the real-life application of international human rights  law,  which  I  am  studying  at  Columbia. Working at a small NGO with a tight-knit team was very rewarding as I could see the direct contributions of my work to the organization. I also gained confidence to work independently and proactively. 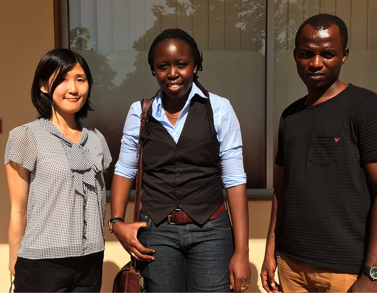