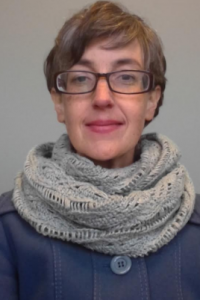 Catherine Kennedy is an archival activist and civil society consultant from South Africa. Since 2018, she has managed the Constitutional Court Trust, a non-profit organisation that exists to promote human rights, the rule of law, constitutionalism and judicial independence in the African region - with a special focus on the Constitutional Court of South Africa.  She also currently consults for the Javett Foundation, a philanthropic foundation with a focus on education, culture and the arts, and a human rights organisation in Zimbabwe. From 2009 – 2016, she was the Director of the South African History Archive (SAHA), an independent human rights archive with a special focus on the records of the South African Truth and Reconciliation Commission (TRC). She has been a board member of GALA, a queer activist archive, since 2009, and recently joined the board of the Javett Art Centre at the University of Pretoria. Over the last decade, she has also provided short-term archival consultancy and training in various conflict and post-conflict contexts internationally in support of dealing with the past initiatives. 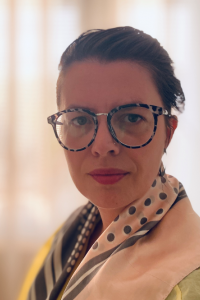 Kaltrina Krasniqi is an award winning Kosovo based film director and researcher working in film, television and digital humanities since the early 2000s. She is a founding member of the Kosovo Oral History Initiative – a digital archive where personal histories of individuals from various paths of life are recorded and published, and she is a co-founder of the popular Prishtina café-bookshop Dit’ e Nat’ which is a non formal setting for promotion of film, literature and music. She graduated with a degree in  Film Directing from the University of Prishtina in 2004 and in 2011 completed her MA at Kosovo’s Institute for Journalism and Communication. In 2015, she continued her professional development at the University of California, Los Angeles (UCLA) with a focus in Film Producing. Her last film Sarabande (2018) premiered at ZagrebDox, was awarded Best Documentary from the Cinalfama Film Festival and was a nominee in the short documentary competition at Camerimage Festival 2018. Currently, she is producing her first feature film, “Vera Dreams of the Sea”. 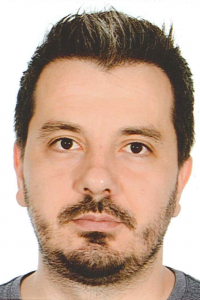 Korab Krasniqi has expertise in dealing with the past, conflict transformation, and memory work, with proven ability in project management, monitoring and evaluation. He is also engaged in researching collective memory and oral histories of ordinary people, wartime survivors and family members of missing persons. With a background in psychology and political science, Krasniqi is engaged in numerous national, regional and trans-European projects and processes that foster inter-ethnic dialogue, conflict transformation, and reconciliation. He is also a trainer on critical thinking and writing, and activism. Krasniqi’s experience also expands to journalism in written media, translation, emotional support and counselling. 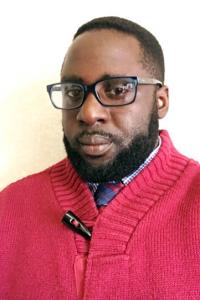 Tonderai Kambarami is a senior researcher at the Zimbabwe Human Rights NGO Forum, an umbrella organization that provides leadership and support to a coalition of 21 Human Rights Organizations in Zimbabwe. In 2015, he coordinated community outreach activities that delivered citizens’ recommendations on the operationalization of the National Peace and Reconciliation Commission (NPRC) to Parliament. This work ultimately led to an improved draft of the bill that directly reflected the conclusions of the community outreach campaign. Since 2014, Tonderai has initiated and coordinated the National Dialogues on Zimbabwean Conflicts, a series of truth-telling and memorialization initiatives that create space for citizens within Zimbabwe and in the diaspora to address the legacy of violence resulting from major conflicts in Zimbabwe’s history.

As an AHDA Fellow, Tonderai will develop a documentation and memorialization project that seeks to ensure accountability for serious human rights violations in the Matabeleland region during the Gukurahundi era (1980-1990). The project will work towards accountability through the documentation and preservation of evidence of crimes, the facilitation of truth-telling and memorialization initiatives for victims and their families, and the exploration of mechanisms to ensure that perpetrators are held accountable.

Tonderai is a Bosch Foundation Fellow. 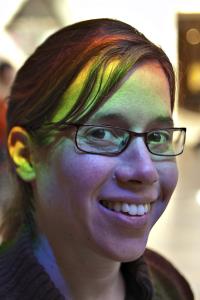 María José Kahn Silva holds a degree in Art History (Universidad de Buenos Aires). Since September 2015, she has been responsible for Educational, Artistic and Museographical Development at ESMA Memory Site, where she is working to develop International Cooperation by building networks between the Site and the international community to promote human rights, memory and museums. Prior to this she coordinated the Educational Department at MALBA -Museo de Arte Latinoamericano de Buenos Aires, developing educational programs and collaborative actions between the museum and social organizations and worked as a Bilingual Museum Educator. She has assisted investigators and cultural agents at Fundación Proa and the Latin America Research Center of Harvard Business School in Argentina. In addition to these activities, Kahn Silva teaches Art History at Escuela Motivarte. As an AHDA fellow, Kahn Silva will develop an education program that invites security and military students to visit the ESMA Memory Site, as a way to learn about and understand the human rights violations committed during the last military dictatorship in Argentina. 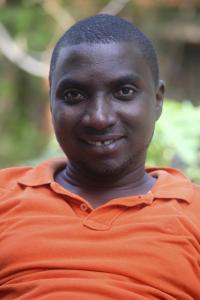 Simon Kaneneka, born in Uvira, in the Democratic Republic of the Congo, is a survivor of the two wars that ravaged the country. After studying Communication Sciences at the Université Lumière de Bujunbura in Burundi, he began working as Director of Communication and Engagement at IMPACT NGO in 2011. At IMPACT, Kaneneka manages a team of 8 staff to design and develop initiatives that make use of documentation to promote dialogue and reconciliation for survivors of sexual violence and former combatants within communities affected by war. Prior to this, he managed civic mass education on general elections in Eastern DRC and was an observer from the civil society delegation for the 2006 general elections in the country. As an AHDA fellow, Kaneneka will develop a project that seeks to use the thousands of stories from perpetrators and victims to initiate reconciliation through the traditional method of “BARAZA” and to work towards the reintegration of combatants into the community. 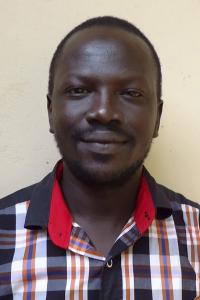 Deo Okot Komakech is a Research and Documentation specialist who believes in dealing with the past in order to move forward. Deo has a passion for post conflict/war development, community empowerment, and enjoys working in multi-cultural and challenging environments. Currently Mr. Komakech works at the Refugee Law Project (RLP), which is affiliated with the School of Law at Makerere University. In his position as the Research and Documentation Officer, he works directly under RLP’s National Memory and Peace Documentation Center (NMPDC) in Northern Uganda. In this capacity, his responsibilities include promoting and tracking the impact of NMPDC’s work within communities and among stakeholders; promoting awareness regarding ongoing debates about truth, reconciliation and accountability monitoring; supporting community memorial initiatives; and working on different documentation initiatives including oral history testimonies, mapping, conflict and historical event documentation.

In terms of specific projects, Mr. Komakech is currently engaged in the documentation of the voices of victims and survivors of massacres that never caught media attention or any form of acknowledgement. After four year in his current position, international and local media houses have nicknamed him “the massacre scooper”. As an AHDA fellow, Mr. Komakech seeks to develop a project that will provide Ugandans in war-affected communities with a digital documentation platform for the collection and dissemination of information. The platform will enable citizens to share their memories and experiences and receive unbiased information about their history; it will also enhance the use of documentation as a means for reconciliation and accountability, and in the longer term could be used to develop a warning system with which to predict and prevent future conflict. 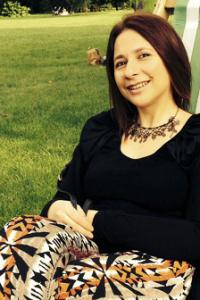 Nayat Karakoseoglu is a program officer for the Strategic Fund for Turkey Program (SFT) of the UK based charity Global Dialogue. The SFT Program aims to improve the capacity of grass roots NGOs and vulnerable groups; to empower human rights activists, and to enable NGOs to implement projects that target raising awareness on human rights issues. Ms. Karakoseoglu works with NGOs and individuals to develop new projects and to promote projects currently under development. She recently contributed to SFT’s specially designed program entitled, “Facing the Past and Transitional Justice”. Ms. Karakoseoglu is also a volunteer at the Hrant Dink Foundation, and a part-time editor of a section of the Turkish-Armenian AGOS Newspaper, which covers issues relating to politics and culture in Turkey. She received her MA degree from the University of Essex in Human Rights.

Ms. Karakoseoglu is particularly interested in sites of memory as a means for remembering, raising awareness, creating empathy and dealing with violent pasts. As an AHDA fellow, she plans to develop a site of memory project relating to the figure of Armenian journalist Hrant Dink, who was assassinated in 2007, in front of the Agos newspaper, which he had founded and edited. Ms. Karakseoglu thus hopes to create a model for how the location of the Agos newspaper at the time of Dink’s murder could be turned into a site of conscience and memory, and in so doing nurture the reconciliation efforts of Armenians and Turks that Hrant Dink himself invested much of himself in doing. 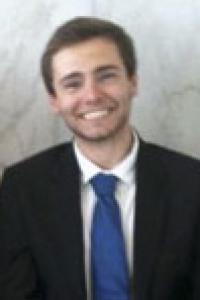 Cleber Kemper currently works in the coordination of The Special Commission of Murders or Disappeared for Political Reasons of the Secretariat for Human Rights of the Presidency of the Republic. His office seeks to investigate the deaths and forced disappearances that took place during the Brazilian dictatorship (1946-1985), to establish a clear record of past human rights violations, and to implement and promote reparation programs for the families of the victims of the dictatorship. Mr. Kemper works specifically to resolve legal claims relating to the legacy of Brazil’s dictatorship, and to assist and follow up with cases of recognition and in compensation programs on behalf of the families of killed or disappeared people under the military regime. The project he will develop as an AHDA fellow relates to the final report of the National Truth Commission, which will be published in May 2014, and which examines the period of the military regime in Brazil. Mr. Kemper seeks to teach about the findings of the report in schools, and to create a series of public events that enable the public to engage with victims, to build empathy, and in so doing to deconstruct the national myths glorifying the military that continue to hold sway today.