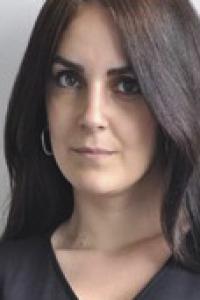 Besiana Xharra is a senior journalist for Zeri, a newsroom dedicated to investigative journalism in the public interest. Her areas of focus include politics, social issues, and topics relating to human rights. She is particularly interested in the areas of radicalization and terrorism, how radicalization has taken root in Kosovo, with a particular focus on young people from Kosovo who have joined terrorist groups and have gone to fight in Syria and Iraq. In addition to these topics of interest, Ms. Xharra is the senior journalist at Zeri to write on topics relating to the conflict between Kosovo and Serbia, and the political and social challenges that have arisen in the fifteen years since that war concluded. Ms. Xharra’s areas of expertise include accountability and transitional justice, conflict resolution, and historical dialogue, and her background includes extensive experience in documentation activities and policy work. Prior to working at Zeri, Ms. Xharra worked for Radio Free Europe as the Editor for the Kosovo desk. She’s worked at a number of other news agencies including Express Newspaper, Ekobiznesi, Pristina Insight and Balkan Investigative Reporter Network.

As an AHDA fellow, Ms. Xharra’s project will examine two intersecting challenges facing post-conflict Kosovo: first regards the coexistence between Albanians and Serbs in Kosovo, and addressing the failures of the recent EU initiative to encourage dialogue between Pristina and Belgrade. Second is to understand and address the radicalization movement in Kosovo and the region, which is closely linked to the Serbian occupation of Kosovo, its treatment of Kosovo Albanians and the stereotypes it perpetuated about this population.