A lawyer with the Indigenous Women Legal Awareness Group (INWOLAG), Ritu provides free legal aid to Indigenous and other marginalized groups, especially women and young girls, in Nepal. She is currently working with the hydropower-affected indigenous community of Tanahu, Nepal. She earned the LL.M. from the University of Pune, India.   Ritu has been involved with human rights issues since college when she first had the chance to meet and interact with victims of human rights violations. These experiences are what drove her to enter the field. Later, through the Legal Aid and Consultancy Center (LACC), she advocated for equal property rights for women in Nepal. Along with her colleagues, she campaigned for legislatures, participated in workshops, and organized rallies to pressure lawmakers. They organized discussion groups, collected feedbacks from the Gorkha and Tanahu districts, and supported the draft of a proposed bill for the legislative reformation of women's property rights in Nepal. As a result, Nepal's government enacted equal property rights for women, which was a milestone in Nepal. 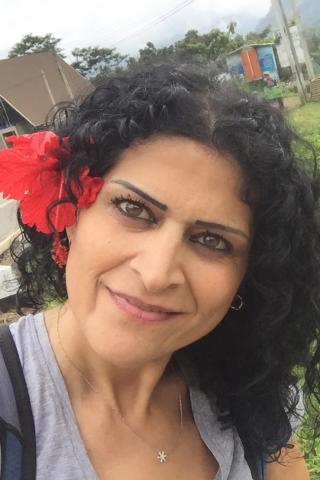 Lucy Talgieh has been advocating for human rights in Palestine since 2007. Specifically, she has been instrumental in creating awareness around issues such as gender-based violence and, more broadly, women’s rights. When Talgieh joined HRAP, she was working with the Wi’am: The Palestinian Transformation Center, a grassroots organization committed to establishing a culture of acceptance and justice in Palestine. She writes, “HRAP assisted me in many ways.” Not only did she learn more about international human rights issues and enhance her leadership abilities, but she also broadened her network. During a program visit to Washington D.C., Talgieh made a lasting connection with the International Civil Society Action Network (ICAN) that has allowed her to receive grants for programming and participate in ICAN’s yearly forum.

In addition to her work with Wi’am, Lucy is involved with a number of different coalitions both regionally and nationally. She recently helped organize a workshop series inspired by UNSCR 1325, a resolution highlighting the impact of warfare on women’s rights. Because of her tireless efforts, Talgieh was honored by the International Commission for Human Rights in Palestine during International Women’s Day in 2016. Additionally, she is a council member of the Bethlehem Municipality since May 2017. 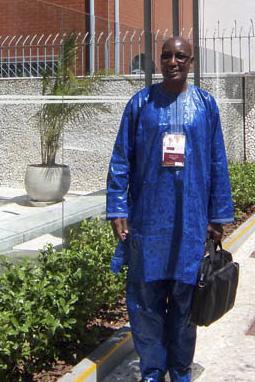 In reflecting on his participation in HRAP, Bakary Tandia writes, “Receiving the HRAP certificate from the Institute for the Study of Human Rights is a constant reminder that one must take more responsibility for human rights protection and demonstrate effective leadership in human rights promotion.”

Tandia co-founded The Abolition Institute, a human rights advocacy organization that focuses on slavery and human trafficking. Since its inception, the organization has developed strong working relationships and partnerships with organizations such as Rainbow Push Coalition and Anti-Slavery International, the oldest abolitionist organization in the world. With the support of U.S. Senator Richard J. Durbin, Tandia reports that The Abolition Institute has successfully advocated for $3 million in new funding to create and expand anti-slavery programs in Mauritania and neighboring countries.

Since leaving HRAP, Tandia has continued working as both the Case Manager and Policy Advocate at the African Services Committee, an NGO dedicated to improving the health and self-sufficiency of the African community in New York City and beyond. As Case Manager, he provides assistance to African immigrants in accessing health and legal services. As a Policy Advocate, he works to raise awareness of public health and human rights issues in the African community through participating in advocacy and lobbying activities at city, state, and federal levels. He also represents the African Services Committee at the United Nations. He was among the 13 immigrant’s rights advocates arrested in an act of civil disobedience during a rally in September 2017 organized by the New York Immigration Coalition in protest against the current U.S. administration’s efforts to end the DACA immigrant amnesty program.

In summarizing the impact of HRAP on his current work at the African Services Committee, Tandia writes, “HRAP has assisted my work in human rights in many ways. It significantly increased my level of confidence when drafting press releases, media advisory, and petitions. In addition, the program broadened and strengthened my network.”

In 2012, he was awarded a fellowship that allowed him to attend the International Human Rights Colloquium organized by Conectas Human Rights in Sao Paulo, Brazil. This conference provided him with the opportunity to meet with human rights scholars and advocates from the Global South. He shared his valuable experience at HRAP with the conference participants and strongly encouraged them to apply for the program.

In collaboration with the Justice Initiative Program at Open Society Institute, he attended a conference on transitional justice in 2011. The conference attendees had a productive meeting in Nouakchott, Mauritania, with the representative of United Nations High Commissioner on Human Rights. Besides these conferences, he has attended numerous meetings with various national human rights organizations to learn more about their perspectives on the human rights conditions in their home countries. In 2011, he was featured on The White House Blog for his work in advocating for immigrant’s rights.

Agnes Sia Tamba is a 2006 graduate of the Human Rights Advocates Program. After leaving HRAP, Tamba returned to Sierra Leone to continue working at the Network Movement for Justice and Development (NMJD). Presently, Tamba is the Program Manager of the Peace and Security Program at NMJD. She works to address the root causes of conflict in the southern province of Sierra Leone. Tamba manages NMJD’s peace education program and helps communities claim their rights without resorting to violence.

HRAP is a capacity building program that strengthens the skills, knowledge and networks of accomplished human rights defenders. When asked about the impact HRAP has had on her work at NMJD, Tamba writes, “I gained a new perspective of how I can promote peace education as an area of conflict transformation.” She writes that her participation in HRAP has helped her successfully mainstream human rights based approaches within NMJD’s programs.

Advocates attend skill-building courses in a myriad of topics such as developing fundraising and advocacy campaigns. Tamba highlights the benefits of these courses on her work at NMJD. She writes that as a result of these trainings, she successfully developed advocacy strategies as part of NMJD’s chieftaincy reform campaign.

Concluding on her experience at HRAP in 2006, Tamba writes, “The diverse cultural experience of New York City and the hospitality of the HRAP staff and Columbia University community is something I will always remember fondly.” 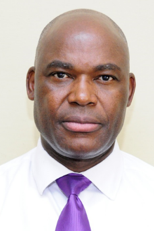 Hubert Masoka Tshiswaka has served as a human rights defender since 1996. He is the General Director of the Institut de Recherche en Droits Humains (IRDH), a private institution of research and training on human rights founded in 2014. In 2004, Tshiswaka co-founded Action contre l’impunité pour les droits humains, an NGO based in Lubumbashi that works to promote corporate responsibility in the Katanga mining areas. Between 1996 and 2004, he was the President of ASADHO/Katanga, a community-based human rights NGO. Following his participation in HRAP, Tshiswaka served as the DRC Country Director of the Open Society Initiative for Southern Africa. He holds the LLM from Witwatersrand University.

When asked in 2018 about the greatest benefit of HRAP, he writes: “With a backward look, years after HRAP, I’m convinced that the program impacted me a lot. IRDH is a result of my passage at Columbia where I learned how to give the best of myself to my community. The global network of alumni has been an incredible resource, providing an opportunity to learn and share experiences of working on common global human rights agenda. I still keep contact with friends in Indonesia, China, Philippines, Nigeria, Ghana, Mexico, USA, and Italy.” 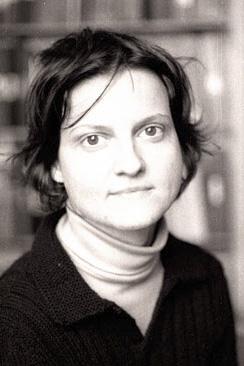 Silvana Turner, from Argentina, graduated from HRAP in 1998. When asked about HRAP, she remarks among the personal and professional benefits of her participation, how it helped her to “establish contact with people from different organizations and different parts of the world”. A fundamental part of the training involved in HRAP is related to relationship-building and networking, skills that allow graduates to enhance their effectiveness as individual advocates and to build stronger organizations in their respective home countries. HRAP provides Advocates with an unique opportunity to share their invaluable grassroots knowledge and learn more about the strategies and best practices of other Human Rights organizations. Furthermore, advocacy networking allows Advocates to develop a range of contacts and foster relationships with relevant US-based organizations that often lead to joint projects and funding opportunities.

During the past 13 years since she left the HRAP, she has achieved notable accomplishments that have had an immeasurable impact in Argentina and worldwide. In 2003, she was one of the founding members of the Latin American Forensic Anthropology Association (ALAF). Turner has worked as a consultant for prestigious international NGOs as Amnesty International, Human Rights Watch, the Washington Office for Latin America (WOLA) and the Euro-Mediterranean Federation against Enforced Disappearance (FEMED). She has also developed an outstanding work with International Intergovernmental Organizations as the UN International Criminal Tribunal for the Former Yugoslavia (ICTY), Office of the Prosecutor; the UN Office of The High Commission for Human Rights; and the Organization of the American States (OAS). Finally, she has also been a consultant for several National Commissions and Governmental Organizations, among them: the National Secretariat of Human Rights of Argentina, the National Trust Commission of Panama, the National Prosecuting Authority of South Africa or the Commission to Prevent and Eradicate Violence against Women in Ciudad Juarez.

When in 1998 Turner entered the HRAP she was working as an anthropologist and researcher at the Argentine Forensic Anthropology Team (EAAF), a non- profit scientific, non-governmental organization committed to the forensic investigation of Human Rights violations. Currently, she continues her work at the organization as a member and a full time researcher. The Team's members have conducted field work in nearly thirty countries through the world and have been widely recognized for their achievements. 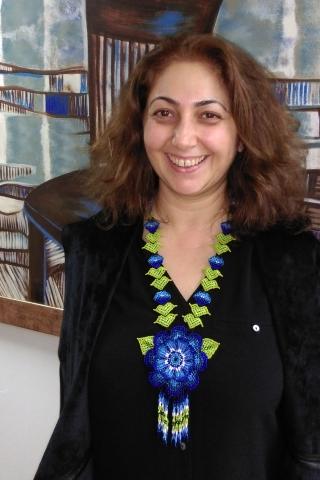 For Yıldız Temürtürkan, human rights advocacy is a profoundly personal experience. In many ways, it is “a school where [activists] get to know who [they] are” and gain “awareness of reality.” When Temürtürkan joined HRAP in 1996, that reality consisted of a fight against the violation of fundamental human rights in Turkey.

During her HRAP experience, Temürtürkan was working with the Human Rights Association (IHD), which was founded in 1986 after a military coup that left Turkey in a dark period. As a part of this organization, she was dedicated to the abolishment of the deaath penalty, an end to the use of torture in prisons, a fight for the release of political executives from prison and a search for missing persons. While participating in HRAP, Temürtürkan found that her advocacy skills were cemented and her passions for activism were strengthened even more. She writes: “Inarguably, it helped to develop my capacity in advocacy work… [and] I started being very proactive at an international level.” In fact, shortly after completing the program she was inspired to help create World March of Women, an international feminist movement.

Temürtürkan states that the greatest benefit of her participation in HRAP was that it made her more confident in international activism, whatever the cause or issue. As of 2017, Temürtürkan continues to be involved in World March of Women and is committed to working with other groups in the hopes of eradicating poverty and violence against women.